The first continuous variable (CV) quantum key distribution (QKD) protocol using coherent states was limited to 3 dB of loss [1]. One way to overcome this limit was by applying post-selection on the data [2]. 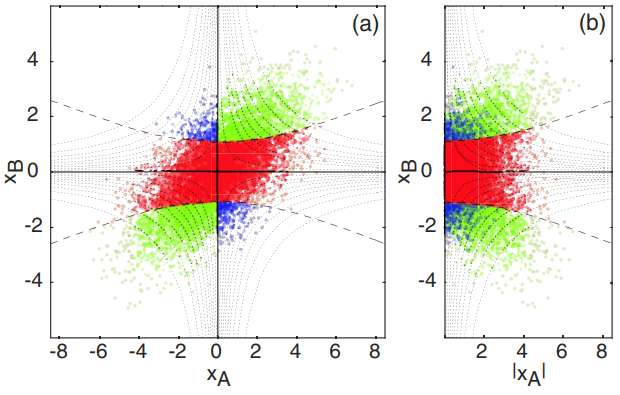 The ANU quantum optics group has a long history in CV-QKD. In 2004, Christian Weedbrook proposed a no-switching protocol that uses a dual-homodyne measurement to simultaneously measure two conjugate quadratures [3,4]. Besides simplifying the existing protocol because we do away with switching between measurement bases, it also results in a higher key rate. This was demonstrated in an end-to-end experiment in 2005 by Andrew Lance and Vikram Sharma [5,6]. Previous demonstrations were proven secure against individual attacks and without excess noise. In 2007, Thomas Symul extended this to collective attacks and also in the presence of excess noise [7].

In 2006, Syed Assad considered a variant of the BB84 protocol where the secret keys are generated via one-way communication instead of the usual two-way communication [8]. In this variant, Alice and Bob do not need to announce their basis choice. In fact, Bob does not need to communicate anything to Alice. This protocol turns out to be slightly less robust to errors than the original BB84. The security of QKD boils down to finding a bound on Eve’s information on the raw key. For individual attacks, this is a problem is one of finding the accessible information on a set of states. This problem is summarised by Jun Suzuki in this 2007 book chapter [9].

Back to CV-QKD. In 2013 Nathan Walk introduced a Gaussian post-selection protocol for CV quantum key distribution by linking the Gaussian post-selection to a noiseless linear amplifier (NLA) [11]. In 2014, Helen Chrzanowski used a measurement-based noiseless linear amplification (MB-NLA) to demonstrate entanglement distillation of the post-selected data [12]. It was shown that this can extend the secure communication distance for quantum key distribution.

In 2016, Nathan Walk and Sara Hosseni performed an experimental demonstration of one-sided device independent (1sDI) QKD with various different configurations [13]. A 1sDI-QKD is relevant in the setting where one party is in a secure central hub, such as a bank or government institution while other users are in less secure satellite stations which are inherently more vulnerable to hardware hacking attacks.

Parameter estimation for QKD using the method of moments 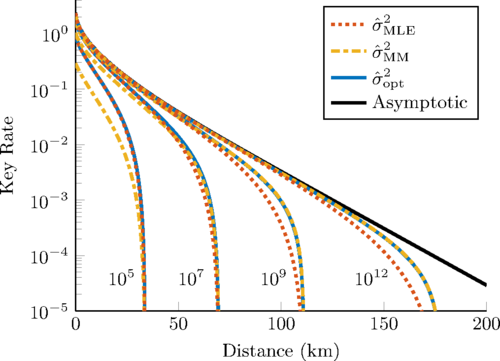 QKD on a chip