A core part of our research is to produce and characterise non-classical states of light. There are numerous interpretations on what non-classicality means. Here is a list of some of the things that we have done.

The ANU quantum optics group has a long history in generating squeezed light. In 2004, Kirk McKenzie demonstrate the generation of broadband continuous-wave optical squeezing from 280 Hz to 100 kHz [1]. This low frequency squeezing is ideal for improving the sensitivity of audio frequency measuring devices such as gravitational wave detectors. In 2018, Francesco Lenzini and Jiri Janousek measured 1.4 dB of squeezing in an integrated photonic platform [2]. We also demonstrate entanglement by verifying an inseparability criterion of 0.77. In 2022, Biveen Shajilal demonstated 12.6 dB squeezing at 1550 nm. This setup delivered greater than 10 dB of squeezing for over 50 hours [13]. 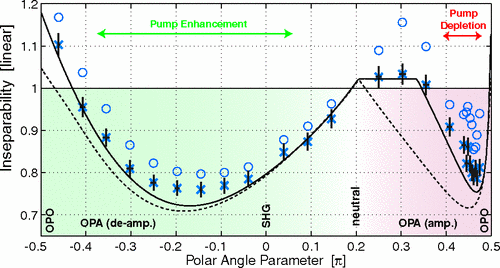 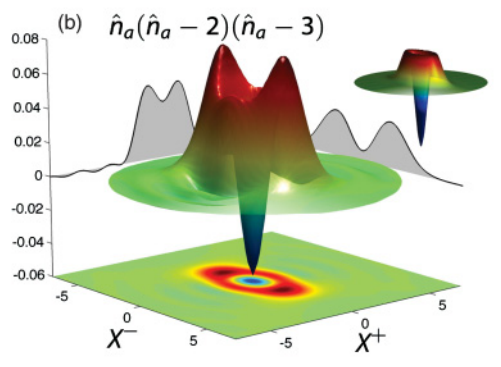 In 2011, Helen Chrzanowski used a homodyne conditional measurement to simulate the statistics of a photon number discrimination measurement to reconstruct a non-Gaussian state [6]. This setup was improved in 2013 by phase randomising the homodyne measurements [7]. This is possible because the Fock states are phase invariant.

In 2012, Mile Gu and Helen Chrzanowski demonstrated the operational significance of discord [8]. The amount of discord consumed in encoding information can only be accessed fully by coherent quantum interactions. The inability to access this information by any other means allow us to use discord to directly quantify this quantum advantage. In 2014, Sara Hosseini introduced and experimentally demonstrate an efficient technique to verify quantum discord in unknown Gaussian states [9].

Traditional entanglement describes linear correlations between two objects in terms of pairs of conjugate observables. In 2015, Shen Yong showed that with a third-order nonlinear interaction, the correlations between the two objects can now be highly nonlinear [11]. This can be used to generate the [cat state]](nonlinear_entanglement.mp4) or even the Sydney opera house state.

A Bell inequality is a fundamental test to rule out local hidden variable model descriptions of correlations between two physically separated systems. There have been a number of experiments in which a Bell inequality has been violated using discrete-variable systems. In 2018, Oliver Thearle demonstrate a violation of Bells inequality using continuous variable quadrature measurements [12]. By creating a four-mode entangled state with homodyne detection, we recorded a clear violation with a Bell value of 2.31. This opens new possibilities for using continuous variable states for device independent quantum protocols.